Ghost Mine in the Sky 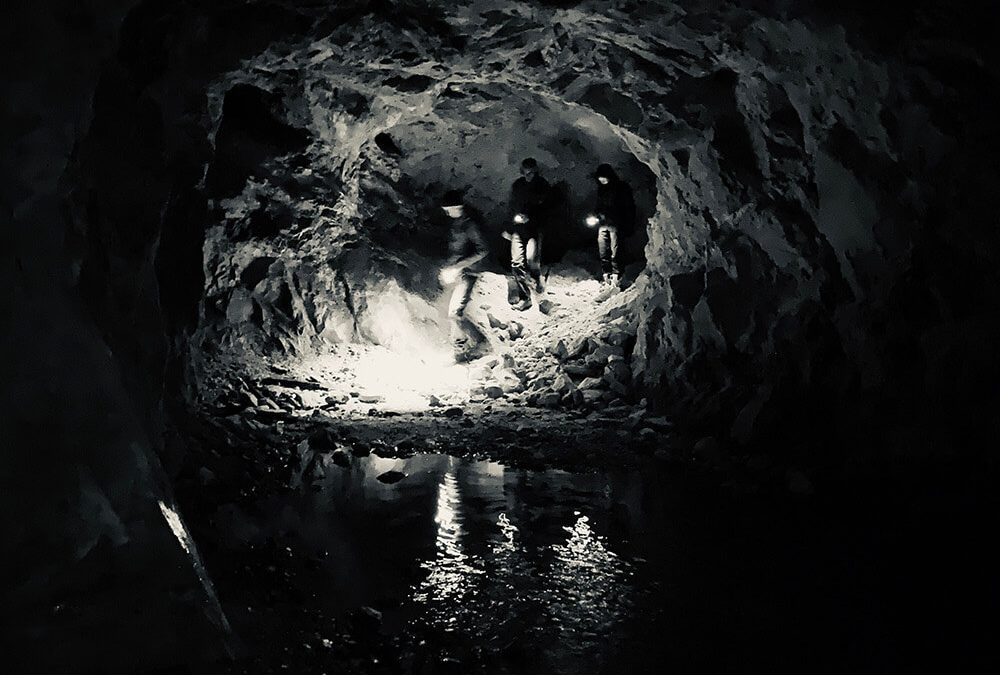 An Adventure Inside Pine Creek Mine

I’ve spent much of my life looking up at the mountains that surround us in this valley. But until last week I had never been inside. 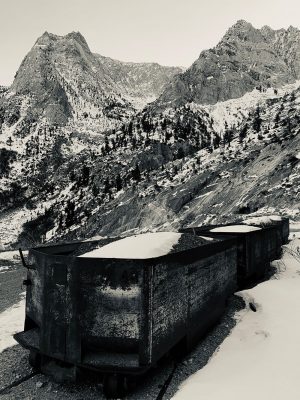 First, a chance meeting (while skiing, of course) between my dad (Robert Atlee) and Jeff Francis, a representative of an up-and-coming hydroelectric project at the long-defunct Pine Creek Mine. He offers a tour. Next, with my dad and his girlfriend the writer Gigi de Jong, I pile into a truck and we drive up and up and up, past Rovana, into the chilly early twilight that falls on Pine Creek.

The caretaker meets us, a tall, friendly man in a headband and dusty work jeans. Hardly 1pm and the sun has disappeared behind the mountains. At almost eight thousand feet, evening is coming on cold. Snow crusts the ground and frosts the roofs of the sheet-metal buildings—those that have survived avalanches past. The last avalanche to visit the mine used the barricade built to protect the buildings as a jump and landed with a vengeance. The buildings that remain contain enormous mountain-moving machines (“snowplows on steroids,” the caretaker says), ore cars that remind me of rides at Disneyland, and an entire abandoned world.

Inside one building, hand weights and cleaning schedules and ore samples and drafting tables lie beneath dust, as if they wait for their owners to walk in and resume calculations on how best to extract tungsten from the mountains. The building is a dim labyrinth, light filtering through dirty windows. Yellow raincoats, brittle from cold and time, dangle inside lockers, their doors gaping open. Two rubber boots lie on the floor. The pipes in the sinks are frozen, and cracked mirrors glint behind decades of grime.

“They left thinking they were coming back,” Jeff Francis told us. Now, the canyon has the feeling of a shed skin, a place abruptly emptied of life. 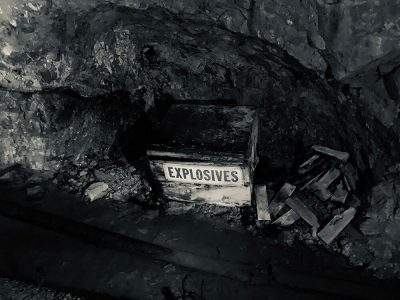 Once, four hundred miners pulled tungsten from these mountains, working in three shifts, the Pine Creek Mine churning away twenty-four hours a day. Workers rode trams 2.5 miles into the mountain, then boarded elevators and creaked two thousand feet up. Tungsten is hard to break and hard to melt. You’ll find it wherever the hardest of metals are needed, like the center of a golf club or tools used to cut steel. In the early 1940s the Pine Creek Mine was the country’s largest source of tungsten. Operations stopped in 2000 when the price of ore sank too low, and cabins that once perched on the mountainside and housed the families of miners were hauled down to Rovana.

We climb into a Rhino—beastly tires, fiberglass windshield, metal roof, cold air streaming across us—and the caretaker drives us toward a hole in the mountain. Then we’re inside.

Gigi and I sit in the front seat next to the caretaker and gasp. This is a tunnel blasted through solid rock. At this point I remember I’m claustrophobic. I remember the respirators I saw collecting dust in the abandoned offices—for radon, Jeff had said, which seeps out of granite. We don’t have respirators and we don’t have hardhats, and of course as we rumble deeper I remember a lifetime of my father’s idea of adventure: rocks flying over our heads on a terrifying near-vertical “hike” in Rock Creek; clinging to his back as we tipped over on a snowmobile; dragging myself out of a thousand rock heaps on the alleged “beginner” mountain bike ride up White Mountain Peak. I give my father a nervous look in the backseat of the Rhino, and we drive on, half a mile in.

We’re in total darkness save for our headlights, which bounce across rough, puddled ground, walls and ceiling stained by rusty iron and glittering with quartz. We pass a discarded box labeled EXPLOSIVES. Four-foot icicles dangle from the ceiling like witch fingers and crash onto the roof of the Rhino as we pass. Water drips in our faces. The sides of the Rhino are open to the chill tunnel air. 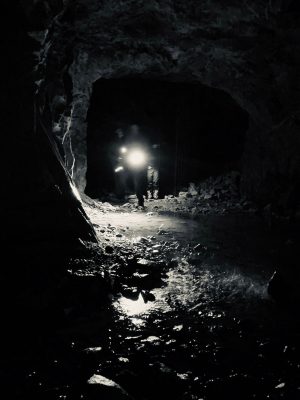 Exploring inside the mine. Photo: Kendra Atleework

From the outside the mountain looks like a solid mass. This tunnel’s been here for decades and in that time has seen few rock falls. Inside such a tunnel is a safe place to be, Jeff tells us, during an earthquake. Yet the mountain is not solid at all. It’s full of water.

Water trickles through fissures in stone, coaxing the color out of iron. Metal plugs on the walls of the tunnel mark the places where underground springs were stopped up, tamped down. Still, water weeps from the ceiling, sprinkling our hats and jackets and pooling at our feet as we climb from the Rhino into this strange world.

From a giant chute above our heads, ore once fell. Imagine stone crashing two thousand feet through darkness. The peak hid violence, noise, the organized chaos necessary to drive modern lives. Now it’s dark inside and silent as it was before tungsten became a thing of value, the mountain regaining an old equilibrium, with a few more scars.

I can almost imagine the air as it once was here—smelling of dynamite, musty raincoats, exhaust, and oil. Now there’s only the smell of cold stone, a mineral staleness. I stare into the dark, the light at the end of the tunnel invisible now. I am numb-footed in my big brown parka and waterproof boots, while the caretaker wears only a green work shirt. His boots look soaked through. He does not seem cold. He decided to leave his life in the city and come here to live among the footprints of four hundred workers and their families, the ghosts of buildings flattened by avalanche, the layers of dust coating reading glasses and typewriters and plastic water bottles and over-exposed Polaroids and yellowed maps of the belly of the mountain.

How does he pass the time?

He listens, he tells me. Watches the sun cross the narrow channel above the canyon. Enjoys the scant hours of day. 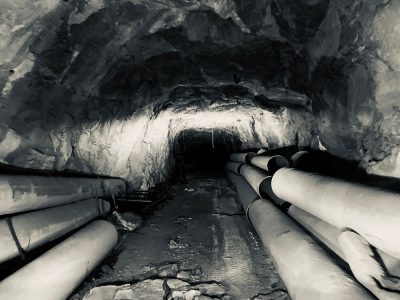 A long, dark tunnel lit by the headlights of the Rhino. Photo: Kendra Atleework

Before we leave the tunnel the caretaker turns off the Rhino’s headlights and we all kill our headlamps and stand a few moments in complete darkness and listen to the trickle of water through the body of the mountain and it isn’t scary, actually. It feels to me like the lights come on too soon. Too soon we’re driving out the way we came, the wind in our faces, a few more icicles crashing over our heads. And then there’s the orb of daylight and fresh air, and we’re out of the shelter of the mountain and the valley glows beneath us, still bright in the winter afternoon.

When I was a child I didn’t know people passed their days inside a mountain I could see from my bedroom window. I didn’t know that water flows through stone that looks solid. I didn’t know there was such a vocation as caretaker of abandoned mines, tender of tunnels no longer traveled, keeper of a left-behind place. But I like the idea of a quiet presence looking over these canyons and this valley, be it the mountains themselves or the people who live among them, tracking the sun on its short December journey, listening to water in secret places flow.

About the Author: Kendra Atleework

Kendra Atleework is the author of MIRACLE COUNTRY, a Sierra Nevada story of flight and return, bounty and emptiness, and the meaning of home. She is the recipient of the Ellen Meloy Desert Writers Award and was selected for The Best American Essays, edited by Ariel Levy. She received her MFA in creative writing from the University of Minnesota and was born and raised in Bishop, California, where she lives now.